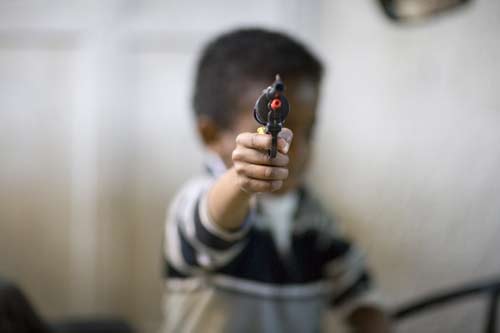 About 1.7 million children in USA live in a home with at least one loaded and unlocked gun, and as a result one kid 1-14 years old dies from gun accident average every day and even more are serious injured. Official statistics claim that there are more than 2 millions firearms in USA and more than 1/3 of Americans have at least one weapon at home. According to stats by Pediatric and Adolescent Medicine, 40% of children know where their parents store the weapons, and more than 20% have handled the weapons. Warning the children to stay away and be careful is not enough. Furthermore, in many occasions, accidents happen by friends who visit them. A 4 year old boy Dylan Jackson shot himself to death using a loaded weapon that he found at his friend’s home during a birthday party. You can not rely on a small child to be responsible in such matters. For children weapons are just toys. Sometimes even, just a more exciting toy or a way to impress their friends. Parents are responsible for this. Keeping a loaded and unlocked handgun at home is not protection but a danger for your family. Furthermore children are very accustomed and sometimes even addicted to shooting and violence nowadays, as it is one of the most common subjects to watch on television and other popular media. In Connersville of Indiana, a 5 year old boy shot and killed his 2 year old brother while playing with a handgun he had found in his parents bedroom.What should parents do if there is a weapon in the house in order to avoid gun accidents and keep the kids safe?

As a conclusion I want to mention that it is much more possible to kill your kid instead of protecting it if you have a loaded gun without gun safe. The gun accidents numbers and statistics are very sad to read. Studies have shown that most kids who find a gun are trying to handle it. In many occasions they also pull the trigger without knowing if the gun is real or just a toy. So, don’t count on your kids if a real and loaded gun gets in their hands. Just don’t let that happen.